EOS Defense Systems USA (EOSDS USA), a US based manufacturing company, incorporated in the State of Alabama, operates in the global defense market and is a company whose principal purpose is the design, development, production and support of Remote Weapons Stations (RWS) in the North American market.  EOSDS USA is headquartered in an 80,000ft2 production facility in Huntsville, AL. 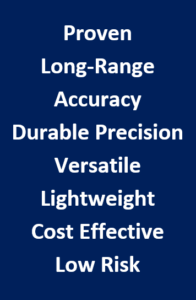 The parent company, Electro Optic Systems Pty Limited, is a leading international technology corporation operating in the aerospace and defense markets. EOS products incorporate advanced electro-optic applications based on EOS core technologies in software, laser, electronics, optronics, gimbals, telescopes, beam directors and precision mechanisms.  EOS is one of the world’s foremost weapon station designers.  The company has built a strong reputation as a provider of weapon system technology for over 25 years to not only the USA, but also Singapore, the Republic of Korea, NATO, the UAE, the Kingdom of Saudi Arabia and the Australian Defense Forces.  Currently, EOS has more than 1,500 weapon stations in service with armies worldwide and is under contract to deliver more than 1,100 additional stations over the next five years.  The company also holds numerous patents for RWS technology, and is in current production, generating more than forty systems monthly.  EOS has the capacity and experience to develop, manufacture, upgrade and fully integrate Remote Weapon Stations that lead the world in performance.

EOS Pty Limited is an Australian corporation that has been at the forefront of the development of remote weapon stations since 1993.  In 1993, EOS was awarded the US Army contract for the development of the SACMFCS (Small Arms Common Module Fire Control System) and in 1998 EOS was awarded the US Army development contract for its CROWS (Common Remotely Operated Weapon Station).  These two weapon system development programs were until 2007, the only US Army development efforts in remote weapon systems and related technology. This was the genesis of the entire field of remote weapon stations, with over 18,000 having been produced globally.  EOS anticipated the emphasis on 30mm weapons for modern combat vehicles and vessels and began an accelerated 30mm development program in 2009.  The complete line of RWS developed and produced by EOS over the past 10 years includes light, medium and heavy variants for a vast range of automatic weapons.  This level of development and investment in the effective support and deployment of these weapons is unique in the industry.